An Attempt at an Idealistic Urban Vision

The Brasilia of North How The Skywalk Was Formed

According to a study by Murphy, D. (2016) presentation A century ago, as cars began to take over the streets, 3D separation became part of the fundamental vision for the city of the future, not only in the illustrations of popular science magazines, but also in the world of architectural manifestos and modernist urban theories. Both Le Corbusier’s Ville Radieuse and Hilbersemer’s Vertical City proposed a metropolis where cars traveled on wide roads and pedestrians frolic over several floors, as part of the efficiency of modern planning cities, eliminating the need for them to share the same space. Danger. Throughout the UK, especially during the system building boom of the late 60s, deck access blocks were built up and down the country, linking the buildings of large estates across voids and creating futuristic new residential landscapes. In newer towns such as Runcorn, long decks connect estates with shopping centres, and in fully rebuilt cities such as Glasgow or T Dan Smith’s Newcastle, huge networks of elevated walkways have become the norm, passing through buildings and over motorways, Carry the public through the new three-dimensional city.

The current Newcastle Skywalk is very different from the original plan. Because some of these “no way to go” and “ghost ramps” have even been demolished.

In the 1960s, planners reimagined Newcastle as a 3D multi-level city, but what remains has now been closed or demolished. Whitney, K. (2017)

There are many specific factors that led to Newcastle’s transformation of the city in the 1960s. Various industries in Newcastle, including chemical and shipbuilding, began to decline after the war, and the situation further deteriorated after World War II is one of the reasons. Newcastle City Council, (2009).

According to Doc (2016) part of the driving force behind the massive transformation of British city centres in the 1950s was the increasing number of cars on the road. The number of cars after the war also increased. Towns built to Victorian or even medieval blueprints are in decline under pressure from traffic problems in the city centre. Alleviating city centre traffic became one of the central concerns of 1960s planners, and in Newcastle Wilfred Burns sought to strike a balance between pedestrian and vehicular accessibility in his proposed urban designs.

Unlike other cities opting to build underground public transport networks, then Labour chairman T Daniel Smith proposed a different approach: segregation. In an ideal Newcastle, pedestrians and traffic would occupy separate areas, designed to interact with each other. Burns chose that elevating pedestrians above road traffic would create the most dynamic and enjoyable downtown experience. This amounts to the creation of a dense network of pedestrian platforms and walkways that stretch from the top of Northumberland Street to the banks of the River Tyne throughout the city centre. In theory, pedestrians could walk the entire city center without having to cross a single street.

To achieve this isolation, it is necessary to consider whether vehicles should descend to the basement, whether pedestrians should be lifted to a new ground level, or whether vehicles should be on top of pedestrians. Therefore, the effect of the scheme is to ensure the separation of pedestrians and vehicles in the vertical plane, to provide convenient service to all shops, and to provide road-level car access for car park facilities, but pedestrians can pass through the shopping platform. Burns, W. (1967)

According to a study by Southern, K. (2016) in Sir Colin Buchanan, commissioned by the Harold Macmillan government to write his influential Transport in Towns Report, in order to deal with future increases in traffic and address traffic in Newcastle Insufficient capacity. The idea of the Central Expressway was born in this context. As part of the vertical city plan, the Newcastle Skywalk runs through the a167m expressway and becomes the only way to cross the expressway. 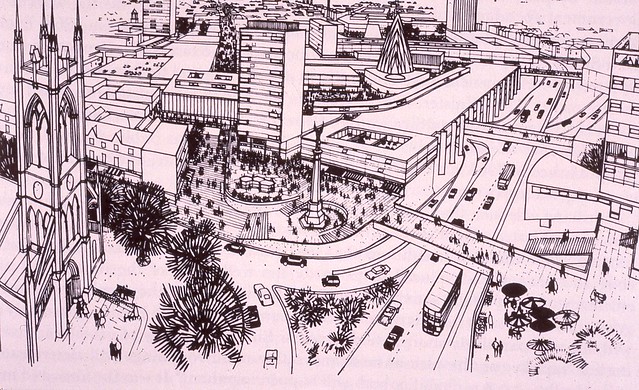 The Current of Newcastle Skywalk

More than half a century has passed since the mighty urban transformation at that time. It’s hard to say whether the controversial makeover will be good or bad for Newcastle.

Pendlebury, J.  (2001) pointed out that one of the themes of Sky Street today is that many of the planned buildings are not completed. The Newcastle master plan was never fully realized due to lack of funding and public disappointment.

However, the idea of “Sky Street” is not completely out of the blue, and there are many buildings in the city that were built around this idea  even from the beginning: 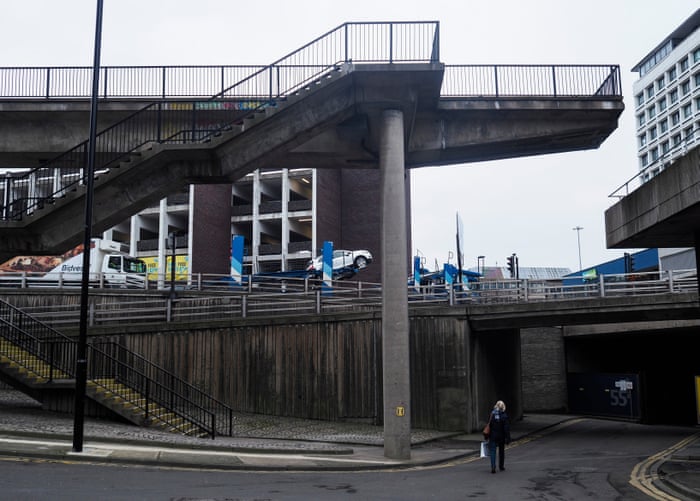 Unfortunately, Newcastle skywalk doesn’t link with most of them. The plan for “sky street” creates island after island floating in the city.

Oli (2022) think Newcastle’s concrete utopia has followed the path of many other cities; a neglected enclave of dereliction of duty, crime and underutilization. All that remains is the famous “pedestrian bridge” and the abandoned modernist surrounding landscape. He Point out that the lack of security in the area is due to the lack of any “natural” surveillance or what Jagannath, T. (2016) called “eyes on the street” from a planning point of view. He went on to criticize: Large, eye-level colorful graffiti can be seen everywhere. As long as someone can stand and spray without falling over, the walls are decorated with some graffiti. Traditional urban narratives would constantly associate graffiti with crime and anti-social behavior, but the reality is far more complex. As anyone with a basic education in urban geography will tell you, the presence of graffiti often coincides with urban governance. And until the space is filled with crime. A covered walkway with beautiful graffiti on every inch of the wall. I could see that dim lighting, even in sunny afternoon conditions, wasn’t enough to provide any sense of security. Wires hang from them like the guts of an industrial slaughtered corpse. The video below captures the journey through the tunnel, where the eerie silence of human life obscures the promise of the region’s once-utopian dreams.

On the other hand, skywalk is not without merit. “There’s such an inspiring, modern, green and airy urban landscape,” Graham said, separating motor vehicle traffic from pedestrians—hence the elevated decks and sidewalks between buildings and highways. “It’s a brave new world,” Graham said. “There is also a very strong spirit of reimagining the nation. To have a new modern society with a modern welfare state full of modern citizens requires modern cities.”

Despite its many shortcomings, the section of the Newcastle Skywalk that spans the highway is still heavily used. Because this is one of the few routes that cross the Central Expressway.

On the other hand, the Newcastle skywalk has its own significant problems. Due to funding issues and public opposition to semi-finished products, many places cannot function properly. People can only sigh at the bridge that came to an abrupt end. Streets in the sky create corners away from the city, making these places crime-prone areas. The low standards of accessibility in the 1960s made many places very unfriendly to people with disabilities. Avant-garde ideas and backward experiences create this contradictory structure. But I have to admit that the part of the skywalk that crosses the Central Expressway is frequently used as an important route. The platform extending from the city library has also become a popular urban leisure space. Makes part of this project still active in people’s sight.

T Dan Smith has also transformed Newcastle upon Tyne from a backward, decayed and neglected city into a vibrant modern metropolis.

Murphy, D. (2016) The fall of streets in the sky (online) https://www.architectural-review.com/archive/notopia-archive/notopia-the-fall-of-streets-in-the-sky [Accessed 1 April 2022].

Southern, K. (2016) How Newcastle’s Central Motorway was made – and the story of two-thirds that were never built (online) https://www.chroniclelive.co.uk/news/north-east-news/how-newcastles-central-motorway-made-11924992 [Accessed 5 April 2022].

Jagannath, T. (2016) The Benefits of “Eyes on the Street” (online) https://medium.com/interviews-and-articles-on-art-public-spaces/eyes-on-the-street-creating-liveable-places-6051ff3096e7 [Accessed 7 April 2022].

One response to “An Attempt at an Idealistic Urban Vision”