Very lively lecture, thank you Ben for sharing. He shared his personal experience, including urban planning as an undergraduate, urban design as a master’s degree, and finally road design. He is also adjusting his own direction step by step and finally determineshis favorite direction.

So let’s go back to the lecture. streets are really a very important part of urban design. With the development of cities and the popularization of cars, urban traffic planning was once dominated by cars, and the space for people to walk was squeezed. As the number of cars has soared, so has the death rate from traffic accidents. So academics are looking for solutions to give the road back to pedestrians. Donald Sidney Appleyard (July 26, 1928 – September 23, 1982) was an English-American urban designer and theorist, teaching at the University of California, Berkeley. He worked on neighbourhood design in Berkeley and Athens and citywide planning in San Francisco and Ciudad Guayana. His 1981 book Livable Streets was described at the time by Grady Clay, the editor of the Landscape Architecture magazine, as “the most thorough and detailed work on urban streets to date”. It contained a comparison of three streets of similar morphology in San Francisco, which had different levels of car traffic: one with 2,000 vehicles per day, the others with 8,000 respectively 16,000 vehicles per day. His empirical research demonstrated that residents of the street with low car traffic volume had three times more friends than those living on the street with high car traffic.

As a saying goes, “There is no road in the world, but when more people walk, it becomes a road.” Early roads are formed in this way, and people walk out of the path according to their own habits.

Modern people have learned to live with driveways and some roads are not used the way they were originally designed. People still slip through fences or take shortcuts. Newcastle has made efforts in “Low traffic neighbourhood”, such as “Street in the Sky”. Layer sidewalks and driveways without interfering with each other. Although the project was not completed for various reasons, some parts were not connected, and some passages were not used or maintained.

Low traffic neighbourhood are to widen sidewalks and erect barriers to prevent cars to drive in. After mapping the boundaries of these LTNs, we assigned all nearby road traffic injuries into two mutually-exclusive LTN groups: We made pre/post comparisons of injury numbers in these LTN groups between January 2012-August 2015 ( pre ) versus July 2016-December 2019 ( post ). We compared trends in these LTN groups to trends in injuries elsewhere in a) Waltham Forest and b) Outer London using Fisher s exact chi-squared tests. Injuries in parts of Waltham Forest that became an LTN in 2018/2019 were excluded (both pre and post) from comparisons (Laverty, Aldred, and Goodman, 2021). 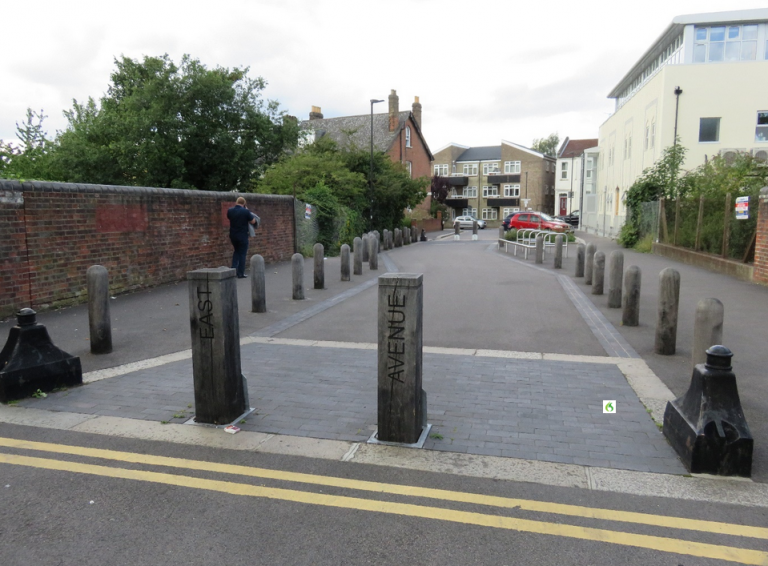 As expected, street width and the number of moving lanes increased with the volume of traffic. Light rail streets usually have parking lots and two moving lanes on both sides. Two-thirds of the homes are single-family and the rest are duplexes or apartments; The average distance, including sidewalks, is about 24 feet, deeper than other streets. These streets have fewer street trees (3.2 per block), probably because the city wants residents to plant trees in their yards. On these streets (1.3 blocks), the distance to grocery stores is slightly longer. Slightly more houses have social amenities such as benches and lounge areas. Medium-sized streets are characterized by much smaller setbacks (only 4 feet on average), but wider sidewalks (15 feet). Nearly 70 percent of the streets are lined with duplexes or apartments. Street trees are more common in these blocks, and they’re closest to grocery stores. The crowded streets have smaller setbacks, with nearly 60 percent of the block lined with penthouses and apartments. Sidewalks have widened and there are three or four moving lanes. Only three very heavy streets are the widest, with an average sidewalk width of 72 feet, between four and six moving lanes. The sidewalks are as narrow as the LIGHT streets, spaced only 7 feet apart on average. On the other hand, 70 percent of their length is made up of single-family homes, albeit spaced very narrowly (7 feet on average). More houses (25 percent) had some kind of protection.

Laverty, A., Aldred, R., and Goodman, A., 2021. The Impact of Introducing Low Traffic Neighbourhoods on Road Traffic Injuries. Findings,.