The design of urban public spaces and their rise and fall

During this trip to Manchester to conduct research on housing and urban space, I was struck by the many differences in the design and development of the city. Even though the designers have the best intentions at the beginning of the design process, the reality is that it does not always work out the way we want it to.

This time I focused my research on Grant Associates’ design for Old Mill Street, which we know from the firm’s official we know provides an important piece of urban public realm as part of the urban design framework of the New Islington Masterplan. This landscape integrates one of the main routes through the site with a series of connected places and aims to create a unique urban experience.However, as work progressed throughout the area, some of the plots did not keep up with the overall progress resulting in the gradual decline of what should have been a unique urban public space. As is evident from the photograph below, this space is truly unique, but it is clearly lacking in maintenance, with the majority of the wooden chairs rotting and damaged, and puddles littering the central pavement. 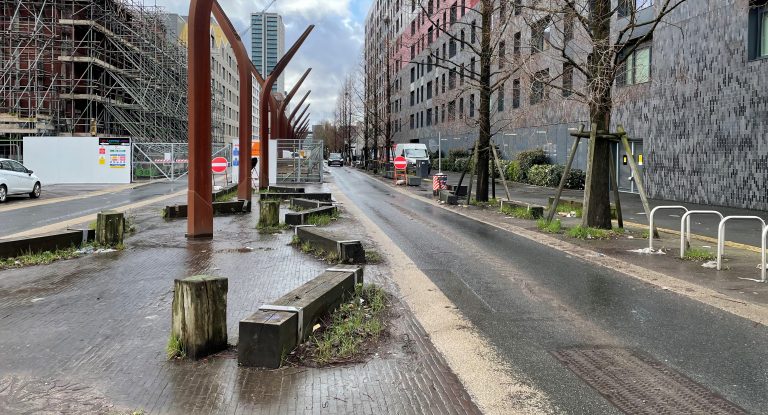 I have been thinking about this series of questions for a long time, and I have gained a new understanding of this phenomenon after reviewing relevant literature including ‘The Death and Life of Great American Cities’ and ‘Saving our cities : a progressive plan to transform urban America’.The transformation of urban space is a dynamic process of change resulting from a combination of factors. When it evolves in a direction that the designer does not want to see, in a bad way, it is time for the designer to intervene, rather than waiting for an area to decay under the influence of ‘nature’.

The way to intervene in these urban spaces in decay is actually easy to find, because in this process of change, various signs have been shown, just as people get sick with the characteristics of being sick, so do cities. By investigating these signs and then intervening, there is a chance to reverse the evolution of the urban space and bring it closer to the direction we want it to go.

Campolo, A. and Main, B. (2000). Revolution and renewal : how churches are saving our cities. Louisville, Ky.: Westminster John Knox Press.