The east end of the quayside: an area in transition

Living on the east end of the Quayside, comes with the benefits of enjoying serenity, peace, and fresh air without being disconnected for the urban life of the city.

The quayside is one of the most scenic spots in Newcastle and the River Tyne is central to the identity of this city. Having lived on the quayside for over nine years, I have noticed how the Ouseburn area has become a hub for cool and creative activities for mostly young residents. The space has started to change, lovely and colourful graffities appearing frequently along the river Ouse giving the space its artistic identity. The urban place has started to gain a new identity shifting from rigid industrial into more artistic family friendly space.

Nine years ago, the Ouseburn area was relatively quiet unlike the other end of the Quayside.  Now, this east end of the Quayside is bustling with life where the space and its use are complementing each other in Harmony. For example,  horse riding (Stepney Banks), cycling (Cycle Hub), kids’ books coming to life (in Seven Stories), pubs and breweries, boutique hotels and students accommodations, art studios and cafes. 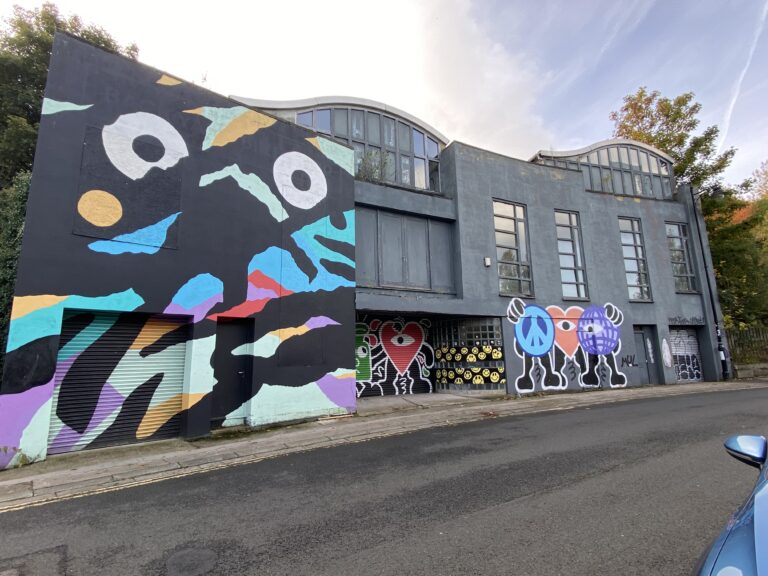 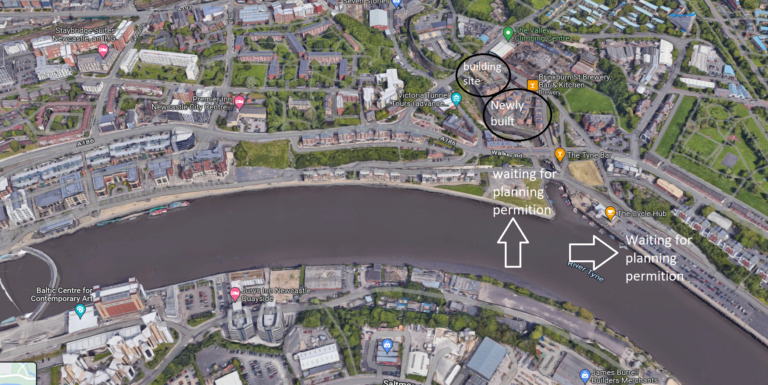 Nevertheless, recently lots of concentrated housing projects are taking place on the banks of the River Ouse. Further, there are continuous attempts to secure a planning permission to build, houses, a tower and blocks of flats on the Malings quay and Spillers quay car park.

As ITV news mentioned: “As well as the tower, which would be one of the tallest buildings in the city and contain 62 apartments, the proposals feature another 13 townhouses and two duplex apartments on the disused Malmo land, plus up to 73 homes in a set of buildings up to eight storeys tall on neighbouring Spillers Quay.” 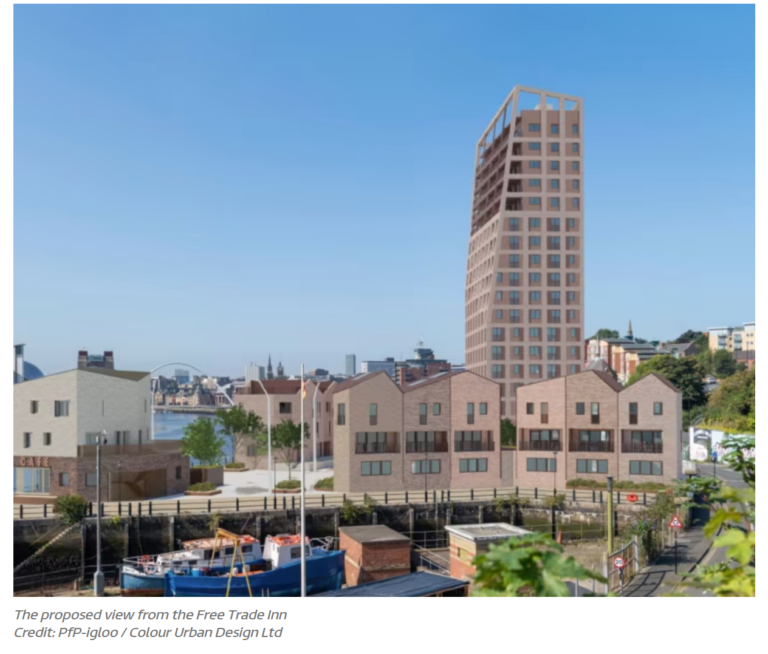 On the top, there is the newly built called The Malings has 76 new houses.

Other newly built in the same corner is in the Ouse Street has 28 new house (image below). 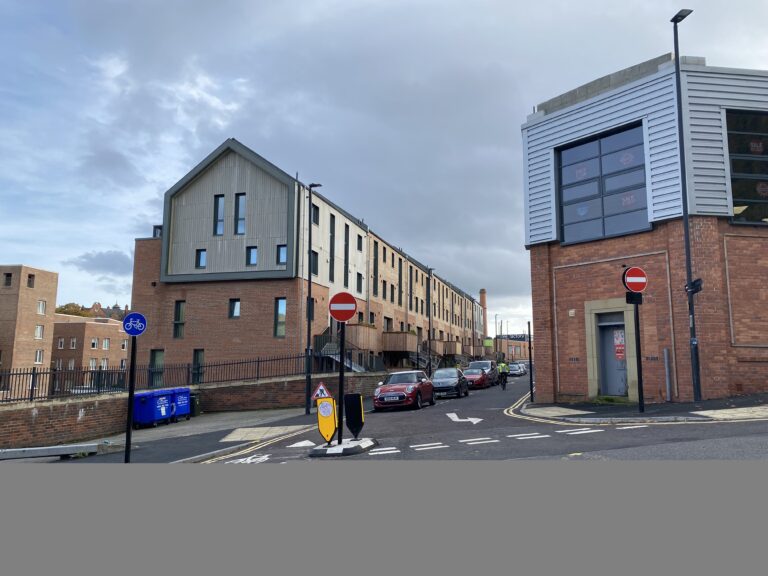 This building site in ford street is going to have 51 flats. 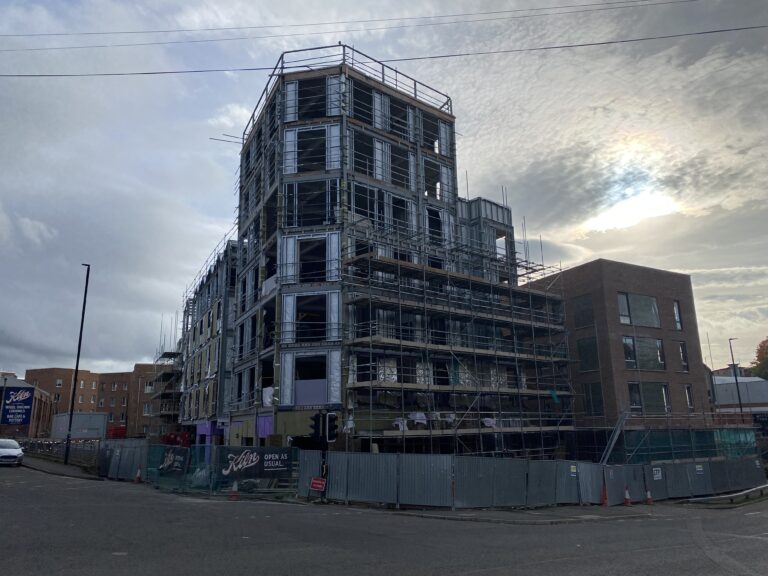 At last, there is already a planning permission in place to build The Whey Aye, bigger in size than London Eye, further down the east end of the Quayside (information from chronicalelive.co.uk). 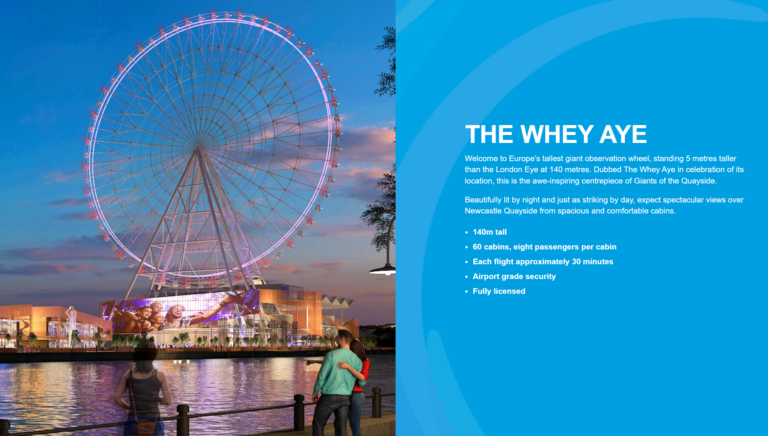 While all these projects may bring some financial benefits, they will come with a cost.  There will be certainly increased levels of noise and environmental pollution that the area will endure. We need to make sure that this special place is not overcrowded or polluted because we cannot reverse any damage done after.

Let me know what you think about it….