A Discussion on Designing Neighbourhoods

Ali Madanipour’s lecture on the design of neighbourhoods can been seen as a very prevalent topic due to the quickly densifying cities we are facing in the 21st century. Ali emphasizes the importance of creating liveable cities through a focus on nostalgia, forms, layout, people, activities, and climate. Certain challenges listed include zoning, distances created due to cars, lack of communities, lack of greenery, poor and/or misused transit infrastructure, and missing character amongst building forms.

The common theme pulled from these attributes is the creation of a community whereby social and physical conditions are addressed and people aren’t left feeling fragmented. Ali sees the ideal solution as an “Urban Village” (city of villages). In conclusion, Ali proposes a solution of focusing on the designers and the design process, particularly in terms of cohesive designs to cities and citizen participation.

On the topic of designing at the scale of a neighbourhood, I immediately thought of Jane Jacobs and her focus on community. Jacobs’ approach seeks ways to create some sort of urban village. She claims, “streets and their sidewalks [to be] the main public space of a city [and] its most vital organs” (Jacobs, 1961, p. 106). She imagines daily casual conversations, mixes of stores and bars and restaurants, displays of morning rituals, sporadic encounters (Jacobs, 1961). In doing so, Jacobs is addressing every condition laid out in Ali’s lecture.

Taking Jane Jacobs’ visions one step further, I turned to another text, this time composed by Kevin Lynch. I did so as a means of further defining both Jacobs and Ali’s ideas, specifically through a different perspective. Lynch focuses on the role form plays in organizing and creating an identity for our surroundings, especially pertaining to paths. Lynch states, “where major paths lacked identity, or were easily confused one for the other, the entire city image was in difficulty…both in reality and memory” (Lynch, 503). It can be said that Lynch’s explanation of paths and their forms further explains what causes streets and sidewalks to become vital and identifiable: the element of memory. 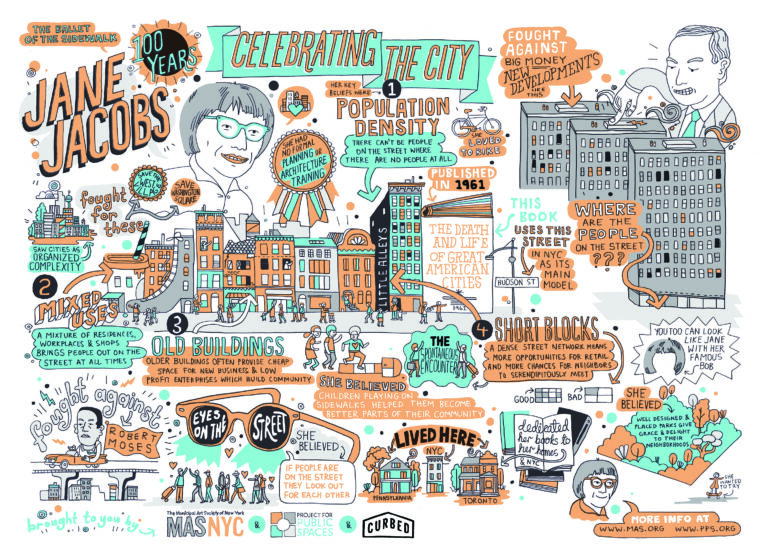 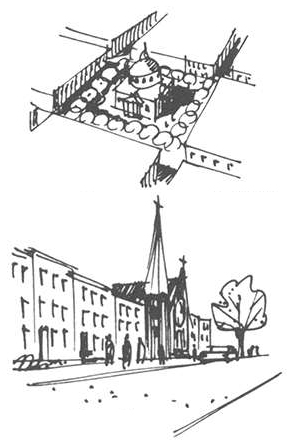 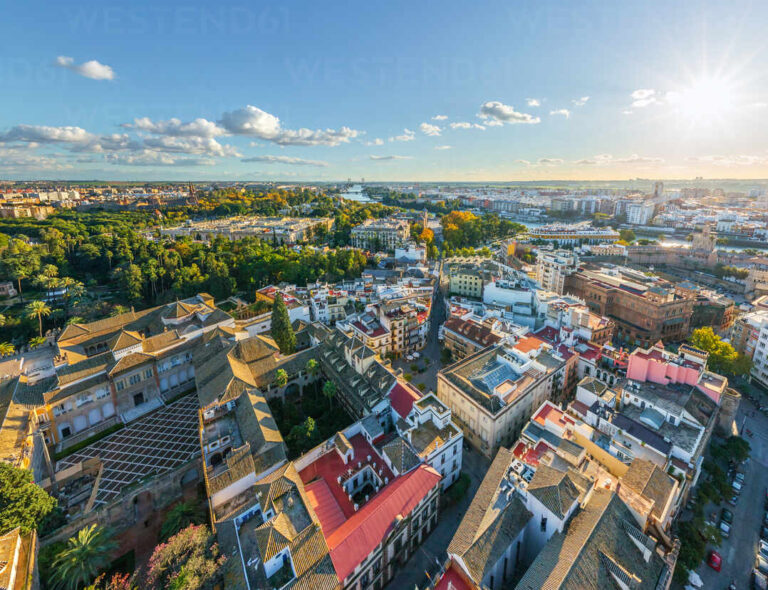 I was caught off guard on a recent trip of mine. As I ventured through narrow, winding streets filled with vibrant colours, cafes, shops, and restaurants, I thought to myself, “what a beautiful neighbourhood.” I came to realize the part that stood out the most was not necessarily the beautiful buildings and strips of vegetation nestled in between them, it was the laughs and intermingled conversations shared among the people. It is here, in the streets of Seville, that Ali’s twelve conditions of liveability, Jacobs’ idea of a community, and Lynch’s identifiable forms come to life. The concept of living in the moment amongst a community is captured by George Lovell in his text, A Stroll through Seville:

[Figure 4: Aerial view of Seville showing the mixed typologies and land use]

“The trick is to relish the so-called small things in life for the great gifts they are, the mini-marvels of human interaction foremost of all, what can transpire in a snip of conversation, an offhand remark, a curious look, a fleeting observation or a passing thought.” (p.1) 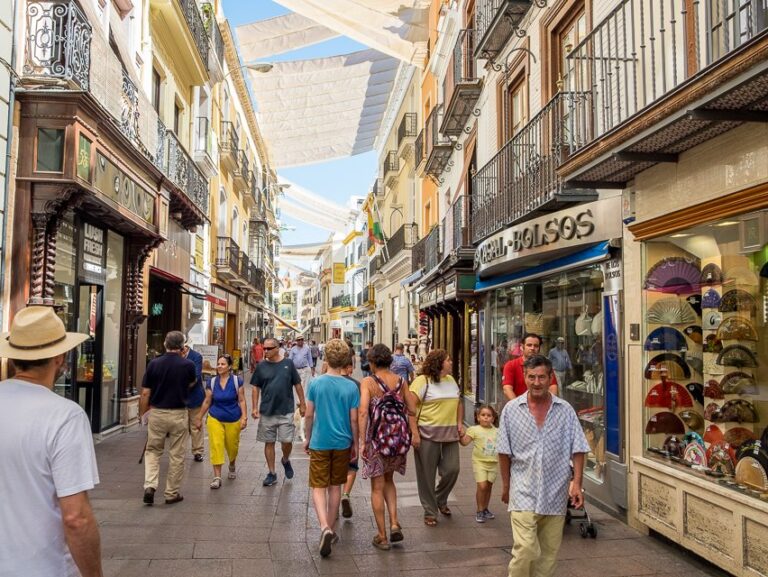 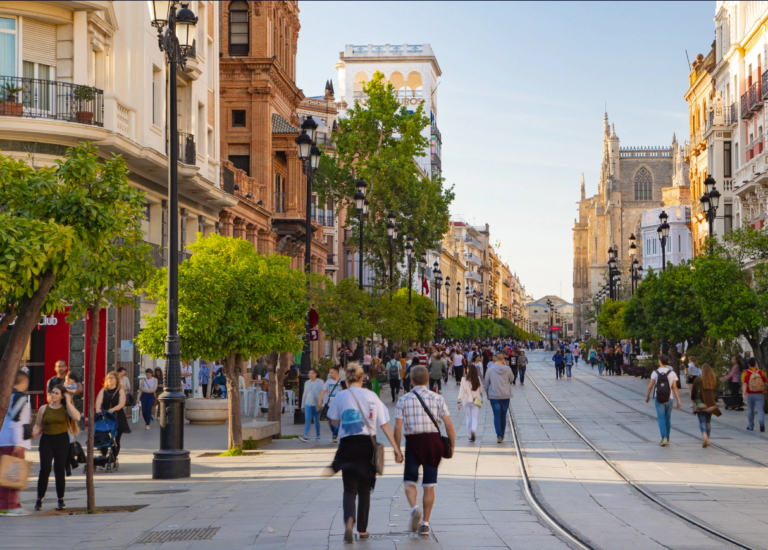 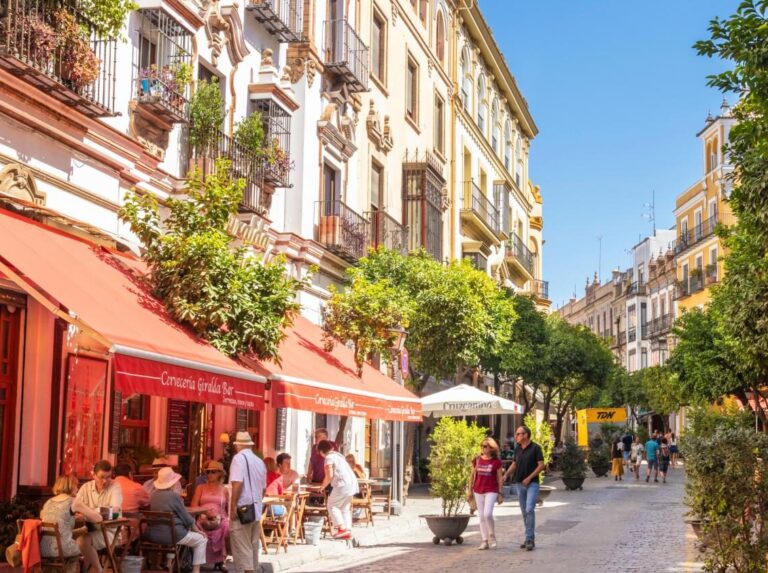 The sights, the smells, the sounds, all created by the bundles of people, all conducive thanks to the design of the neighbourhood. It can be said that Seville’s character relies heavily on its network of pedestrianized local streets, inlets of vegetation and open spaces, and mixed use and configurations of buildings. With this in mind, a couple of counters can be made to Ali’s points against zoning and for contemporary Garden Cities (defined city centres surrounded by greenbelts). Despite zoning being a limitation on design, it was required to create the well-integrated programming found throughout Seville. The Garden City approach would likely segregate Seville’s unique winding paths and hidden nooks due to enforced greenbelts. Putting these points aside, I can conclude through Seville that liveable, identifiable, communities can be linked through people – the true essence of urban neighbourhoods.

“You contemplate that plaza, that square, that house, and become aware of its essence. You surrender to what you think is one final impression, unravelling it, only to find, just around the corner, a new surprise that makes you reel, and think again. From encounters like these is this place, mysterious and inscrutable, magically spun.” (p. 2)

One response to “A Discussion on Designing Neighbourhoods”