The Parliament of Hungary

People are good at experiencing beautiful things through their eyes. But when people go to appreciate an artifact, they are often attracted not only by the pure artistic expression of the artifact but also by the functional design contained behind a non-purely artistic object. These designs, or rather compromises on functionality, often produce unexpected beauty. For example, when one admires the curvature of the leading edge of a warplane’s wing, the designer does not make the product for purely aesthetic purposes. The curves in front of people’s eyes may be derived from some compromise on aerodynamics or may be constrained by material science limitations. So when one observes an artifact that is denied but pursued, one’s mind will have a different understanding of this other kind of beauty. When one sees a painting compromised by pixels, an artwork compromised by voxel expression, this kind of industrial beauty, we call pixel art.

How to Restore Exactly

The first step in restoration is to find information. Such a complex building cannot be built just
by photos. I visited once, so I left some photos of the interior, while Google Street View can
also enter them, allowing me to observe the architectural details of the parts I did not photograph.
And I was lucky to find a Hungarian urban architectural protection project through the
Internet – a website that scans and uploads ancient architectural drawings in Hungary.

After finding the information, after a while I completed the model of the building. Actually, this process is not boring, on the contrary, I enjoy it. 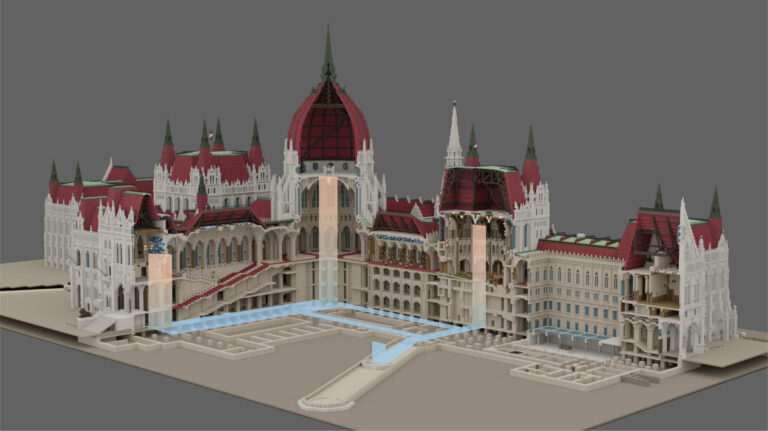 As the first batch of buildings with electrical lighting and air conditioning (maybe the early ones) built in the whole house, unlike the Palace of Westminster, Országház’s heating boiler in winter is not in the building itself, but in the building itself. In nearby blocks, steam is piped into the building, which prevents chimneys from breaking the building’s exterior. The air is sucked in by the vents on the ground, heated, and raised, and the negative pressure created by the rising air sucks more air from the vents. Keeping the entire building cool in summer, with heating in winter, keeps the interior air fresh. There is a saying that the foundations are also kept dry so close to the Danube.

What I want to do with this project

The vision of This Project

Through my work, learning about these historic architectures could be made easier and more intuitive for those who couldn’t visit these buildings in person. I hope the community can be worldwide, which in that case, I can present all kinds of historic buildings to everyone in the world via the Internet.
I want to take this opportunity to display those excellent historical buildings to young people.
So that more people can be interested in architecture and the history behind it through games.
By borrowing from the latest concepts, also can think of this as an exploratory attempt to make the concept of meta-universe a reality for public education.